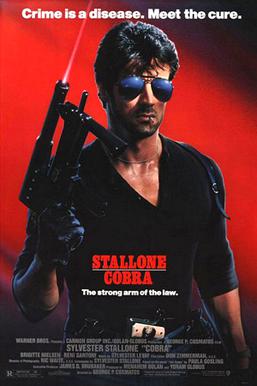 One word, one syllable, one inimitable action hero.

On this episode of the Really Awful Movies Podcast, the George Cosmatos 1986 shoot-em-up.

There’s a hostage situation in the City of Angels. Who you gonna call? A member of an elite LAPD unit known as “Zombie Squad,” and it’s lead by this badass to the right.

Turns out, there’s an elusive group behind a rash of crimes affecting the city. It’s an Illuminati-type association called New Order (not to be confused with the occasionally dour Manchester synth rock band nor the WCW wrestling faction New World Order).

Crimes are pinned on one the Night Stalker and a witness is put in Cobra’s protection.

A Dirty Harry by way of Cannon films (Golan and Globus produced this one), this Sly and Brigitte Nielsen action flick is dark, daffy, goofy, violent and well worth checking out.