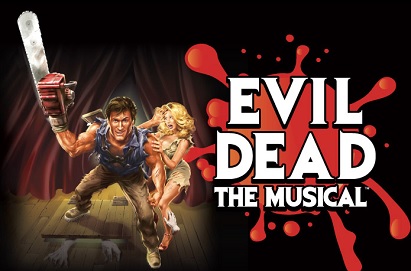 Since it took to the stage in 2003, Evil Dead: The Musical has been a smash hit. On this episode of the podcast, we have a special Evil Dead: The Musical giveaway, two tickets to a Toronto performance of the hit show, February 17, 2016 at the Randolph Theatre. Listen to this episode for details about how to enter. And heads up: there are really cool secondary prizes too, so you can enter even if you aren’t in the Greater Toronto Area. These prizes are courtesy of Starvox Entertainment. A big thanks to them.

Chris Bond, the show’s director and co-creator, breaks down what makes the splatterfest so much bloody fun. We’ve had the good fortune of checking out previous runs of the show in Toronto and if you’re a fan of Evil Dead and Ash vs Evil Dead (and really, who in their right mind isn’t?) it’s absolutely MUST SEE stuff.

From its modest beginnings in a back-alley Toronto bar to off-Broadway and to Cleveland, Vegas, New Orleans, Seoul, and basically the world – the show has wowed fans wherever it’s been.

And don’t forget to check out the Really Awful Movies Podcast, with new episodes every weekend.