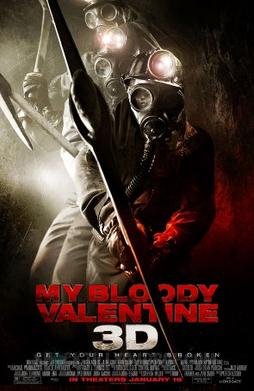 My Bloody Valentine 3D is a reboot of a Canadian fave, the original MBV from the 80s.

My Bloody Valentine 3D is a 2009 American slasher film directed by Patrick Lussier, and starring Jensen Ackles, Jaime King, Betsy Rue, and Kerr Smith (the first man to have an on-screen gay kiss on U.S. television, in season three of Dawson’s Creek).

This one focuses on residents of a Podunk mining town (again) that is (again) plagued by a serial killer on Valentine’s Day. We all know the story: Harry Warden, who narrowly escaped a mining disaster on Valentine’s Day, comes back to wreak havoc on townsfolk and mine workers alike with his trusty pickax (among other weaponry).

Filmed on location in Pennsylvania, the film was given a 3D theatrical release through its distributor, Lionsgate, premiering in the United States on January 16, 2009. It was the first R-rated film to be projected in RealD technology and to have a wide release (1,000 locations) in 3D-enabled theaters. It earned $100 million at the United States box office, and had a budget of $14 million.

Does the remake stand up to the original, that fun bit of classic Canadian horror?

Instead of a bunch of unknowns, we get Smallville and Dawson’s Creek TV stars. Instead of Nova Scotia, Canada, it’s Harmony, Pennsylvania. But the key difference in this incarnation of My Bloody Valentine is, of course, the 3D.

This gory slasher looks bloody awesome with stuff comin’ at you, but it also hides a lot of the film’s flaws.

On this episode of the Really Awful Movies Podcast…Put on your hard hat and come underground with us as we break down My Bloody Valentine 3D.