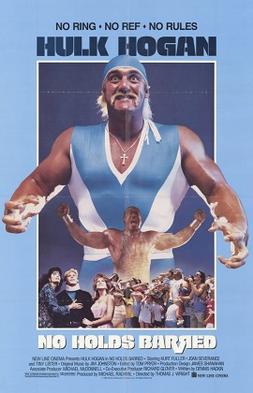 Popping vitamins and saying our prayers with the second Hulk Hogan movie we’ve endured on the podcast, 1989’s NO HOLDS BARRED.

A network with sagging ratings tries to boost their brand by signing the world’s top wrestling draw, Rip (The Hulkster). When he balks, they produce their own long-form political drama for HBO, become hugely successful, and the rest is history. Just kidding.

They do what any major network would do under the circumstances: attempt a kidnapping, bait the competition with a seductress, then stage a cage fighting tournament for television, featuring a cross-eyed psychopath straight outta prison.

No Holds Barred combines the logic-defying zaniness of a Cannon film (even though it’s New Line), with the crappiness of a WWE production. The Washington Post said it has a  “script that seems to be a collaboration between Hogan’s publicists and Hollywood hacks who somehow missed “Rocky” and its progeny…”

Featuring a generous 11% approval rating on Rotten Tomatoes, No Holds Barred was promoted on WWE via “No Holds Barred: The Match/The Movie. The matches were no great shakes either (The Ultimate Warrior is on the undercard) and the federation remains embarrassed enough that this isn’t available on their network/website.

When it comes crashing down and it hurts inside…