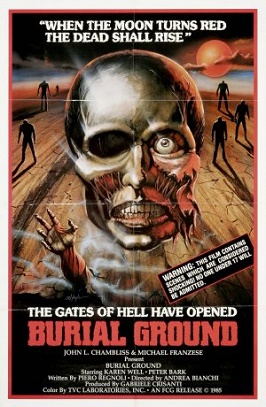 Some voodoo mumbo jumbo re-animates the dead (actually, some Etruscan mumbo jumbo to be precise). The dead, then go after the living. And the living try and escape!

It’s an Italian Zombi knock-off, courtesy of director Andrea Bianchi. As a director, Bianchi is known for (among other things), Cry of a Prostitute (we haven’t a prostitute cry, but imagine it’s heart-wrenching) and What the Peeper Saw (we haven’t seen that one…but…you get the gist of what Bianchi, aka, Andrew White, is all about). He sure does like his crime / exploitation films.

In Burial Ground, when the Gates of Hell open, and Lucio Fulci is nowhere to be found, you have to kinda settle for Bianchi.

Bloody Disgusting said this about Burial Ground: [the film] “contains all the necessary elements for a good zombie movie including maggot-infested corpses, entrails eating…

It’s definitely an oddball flick. It is most definitely weird and wildly perverse…all the good stuff.

Be sure to tune in to the Really Awful Movies Podcast every week for fun genre film chat!