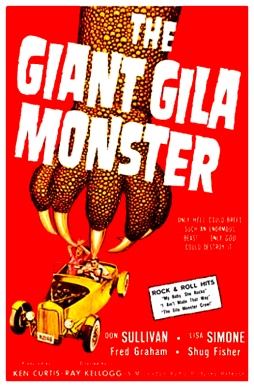 The Giant Gila Monster is not only a 1959 monster movie, there’s a sci fi component too. And hell, it’s a hot rod juvenile delinquent flick too.

The Giant Gila Monster was directed by Ray Kellogg and produced by Ken Curtis.

It’s a decidedly low-budget affair, meant to be an accompaniment to the equally less-than-spectacular The Killer Shrews (another Ken Curtis production), a film perhaps best known for being sent up on Mystery Science Theater 3000.

The effects included a live Mexican beaded lizard (not an actual Gila monster) filmed on a scaled-down model landscape.

A drive-in cash-in, the film is a pretty good example of the kind of creature feature the 1950s were famous for.

In our discussion of the film on the Really Awful Movies Podcast, we delve into 50s sensibilities, the singing abilities of Don Sullivan (and the infamous Mushroom Song), our total inability to speak Spanish (which we butcher like a hog), language use, and of course, spinning platters.