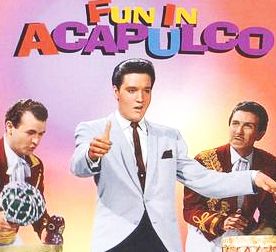 Elvis Presley. The King of Rock ‘n’ Roll. Here he is, or was, at near the peak of his powers (or just about to level off) in one of the many, many terrible movies he appeared in, FUN IN ACAPULCO.

The massive pop culture icon plays Mike, a former member of a flying trapeze circus act, who finds himself lost in…Acapulco, and needing to find work to make ends meet.

He gets connected with a little kid, who becomes his manager, landing him singing gigs at all the best hotels/clubs in the Mexican town, usually accompanied by horrible mariachi singers. Along the way, there are a couple of love interests (one of whom is played by Bond babe, Ursella Andress) and of course, a fierce (well, not really) rivalry between gringo Mike and a competitive cliff diver (again…once you’ve seen one mano a mano tilt between a lounge singer and a competitive cliff diver, you’ve pretty much seen ’em all).

On this episode of the Really Awful Movies Podcast, Jeff and Chris break down the phenomenon of Elvis Aaron Presley with a discussion about:

And much, much more.

So thank you for listening…and…thank you…thank you very much.