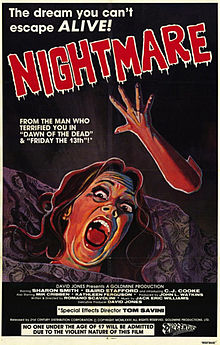 Nightmare is also known in some circles as Nightmares in a Damaged Brain.

It’s a 1981 horror film, made during the height of the slasher boom, and seems to have been forgotten amidst all the titles that were being churned out during the period.

Directed by Romano Scavolini, the lurid low-budget affair gained instead street cred when it was added to the Video Nasty list in the UK, and its distributor jailed for failing to remove some of its violent content. Still, when compared with others of its ilk, Nightmare is fairly tame.

The film also courted controversy by adding special effects man Tom Savini to its promotional materials, despite it being a movie Savini denies having worked on.

In the film, George Tatum (Baird Stafford) is given an experimental drug treatment by psychiatrists. Then, on the lam, he sojourns back down to his home in Florida.

Along the way, he has recurring nightmares (hence the name) of a violent incident from his childhood, which forces him to spree kill.

On this episode of the Really Awful Movies Podcast, Jeff and Chris discuss:

Join us, as we delve into (say it with us) NIGHTMARE. There’s even a Bette Midler reference!

Every week, we upload new episodes of the Really Awful Movies Podcast. Send us an email if you like what you’re listening to.