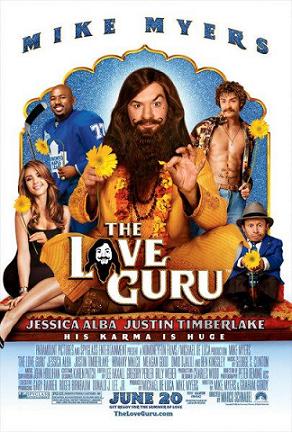 2008’s The Love Guru, pretty much sank Mike Myers. And that’s a DAMN shame. It’s a terrible movie, to be sure, but a terrific comedic talent like Myers, deserves another shot.

Despite supporting cast-mates like Justin Timberlake, Stephen Colbert, Jim Gaffigan, John Oliver and Sir Ben Kingsley, The Love Guru really lays a big-time egg. This is a monumental stinker, and while not on the level of Master of Disguise, it’s still something to behold. Juvenile zingers, tepid puns…sure, these were present in Austin Powers, but that had an indelible (eponymous) lead that left his mark on pop culture forever.

The Love Guru is lost in no man’s land, neither satirical enough to pot-shot self-help culture, nor lascivious enough to be a Charles Manson-type figure. It just hangs there on a vine.

In a nutshell (“help, I’m in a nutshell!” – see, Austin Powers was the kind of quotable film The Love Guru is not), Guru Pitka is brought in to help a Toronto Maple Leaf star get back together with his wife, so that he can win the Stanley Cup, and help get the Guru to the top of the Guru heap (usurping Deepak Chopra).

Behold, the movie that left Mike Myers in the dust as a comedic force.

On this episode of the Really Awful Movies Podcast, we talk about: