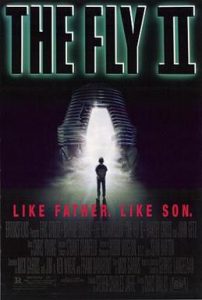 The poster says it all…Like father, like son. The Fly II did gonzo box office but badly with the critics. And that’s a bit of a shame as this one is fun as hell.

Sure there’s no Cronenberg, Goldblum, Davis, etc. And those are big-time names. But director Chris Walas is game and gives us a solid oddball sequel that’s a smashing good time.

Martin Brundle is the son of Goldblum’s Seth. He’s birthed in Bartok Industries in spectacular fashion. Since Gina Davis wasn’t back, the folks behind this sequel did as best they could replicating her…and that was quite ingenious when you think about it.

Martin prematurely ages and is the subject of experimentation. Gradually, he starts to feel more and more fly-like (like pa) and when granted his freedom starts to explore.

The Fly II (1989) then goes really crazy and gory. Much more of a monster movie than the first, a psychological slow-burn, there is nonetheless lots of fun to be had here. And on our show too. Check out our Really Awful Movies Podcast for genre film discussion that’s smart, and mostly sober.