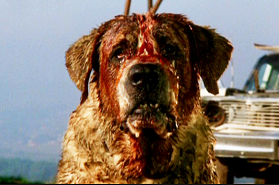 On this episode of the Really Awful Movies Podcast, a look at the unconventional animal attack movie, Cujo.

Adapted from a Stephen King novel, which oddly, as Stephen King die-hards neither of us had read, we decided to take a look at this one.

Cujo was directed by Lewis Teague, and written by Don Carlos Dunaway and Barbara Turner (under the nome de plume of Lauren Currier).

Cujo the tale (or, er…tail) of the eponymous dog, a St. Bernard. He gets rabies from burrowing underground and getting bitten on the nose by a bat. He goes after his owner, an off-the-grid mechanic, his buddy, and the Trenton family (whose lemon was being serviced by said mechanic).

On an earlier episode of the Really Awful Movies Podcast…we covered two movies “inspired” by the great JAWS, The Car and Grizzly, with Scott Drebit from Daily Dead. We love our animal attack movies!

However, Cujo is cut from a different cloth. Usually animal attack movies involve some experiment gone wrong, which results in animals growing to super-sized level and going haywire, attacking the townsfolk. And invariably, authority figures get involved and nobody listens. However, that is not the case here.

Cujo is quiet, and inward focused. But it’s still worth checking out despite a few lulls.

On this episode, your genial hosts Chris and Jeff, talk about getting attack by dogs growing up, and what it’s like to be a dog, versus a cat person. We also talk about our love for Mr. King, his scene settings, and our fondness for Danse Macabre.  We also break down what makes this different from other natural horrors.