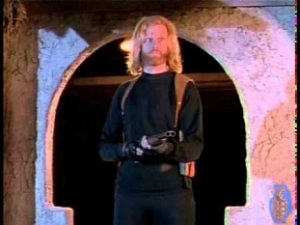 Shotgun Jones and his partner Max (one white, one black a la Lethal Weapon, to which the flick is oft-compared) are hunting down a “basher” in downtown Los Angeles. A “basher,” according to lingo, is someone’s who’s rough with prostitutes. He’s more than rough. He’s killed a few. He’s announced by ear-piercing Eddie Van Halen-style guitar histrionics.

Shot in 2 weeks (and you can tell), Shotgun is one delicious set piece after another. There are head-spinning lines like “she was just another hooker.” “She was your SISTER!” and “the air in here…it smells.” As we mourn the passing of Steven Bochko, this is as far removed from a quality police procedural as humanly possible.

One cop is by the book, the other does things his own way. Their superior cuts them slack while chastising them, and there’s a very odd police lineup where the witnesses all gather together to compare notes!

Hilariously inept, and as fun as any action films you can find, join us as we discuss Shotgun!