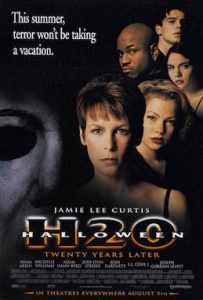 Halloween H20: 20 Years Later is a 1998 American slasher film directed by Steve Miner, the director behind two Friday the 13th films, as well as The Wonder Years and episodes of Dawson’s Creek.

This film is the 7th, count ’em 7th installment in this seemingly inexhaustible series. The screenplay was by Robert Zappia and Matt Greenberg adapted from a story by the former.

Halloween H20 was released on August 5, 1998, two and a half months before the 20th anniversary of John Carpenter’s original (and superior in every way that matters) Halloween (1978)

Set twenty years after the events of the first two movies, H20 centers on a post-traumatic Laurie Strode living under an assumed name, the headmistress of some California prep academy. Her long-lost brother tracks her down all the way from Illinois, and Laurie must face her greatest fear. Forget all that FDR “the only thing we have to fear is fear itself” crap. The Shape is on the loose. And his knife is sharp.

But that’s the only thing that’s sharp in this debacle.

How does this reboot fare?

On this episode of the Really Awful Movies Podcast, your ever-genial hosts delve into Halloween H20. Does it age well? Jamie Lee Curtis sure does. What about that cast? A dream cast, or a bust? Where will things head when the latest incarnation hits the theaters in 2018? Do settings make horror? What’s the deal with Loomis?

We’ll tackle all the above and much much more.