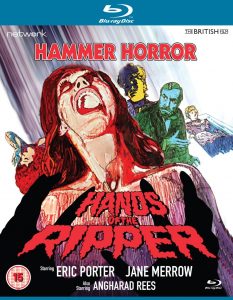 From London, England, recorded from the confines of our hotel in Kensington.

On this episode of the show, we talk about our visit to Whitechapel, East London and discuss the lesser Hammer film, Hands of the Ripper.

Jack the Ripper has fascinated people for a century + and will do so for years to come. As the original serial killer, Saucy Jack terrified Londoners at the end of the 19th century, hunting down prostitutes and butchering them, in some cases beyond total recognition. Speculation about his identity was rampant, the police couldn’t do much of anything amidst internecine squabbling, and vigilante mobs were formed to patrol the streets after dark.

Who was this man in a top hat? Did he have medical training? Was he a butcher by trade? Seemingly everyone in every pub had a theory as to Jack’s identity. Try as we might, we’ll never ever know who was behind the five prostitute murders in 1888. 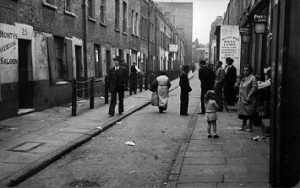 Hands of the Ripper features a female antagonist, Anna, the daughter of Saucy Jack. She routinely flashes back to his misdeeds as she was growing up. She gets mixed up with a brothel Madame and phony psychic (is there any other kind, really?) who uses her as part of a scheme to separate customers from their pounds. One such customer though, one Dr. Pritchard, a local Freudian psychoanalyst, takes an interest in her plight…and agrees to save her from a life of prostitution by taking her in.

Join us from London.