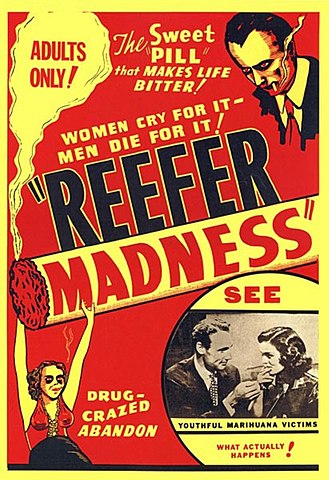 Finally, we get around to tackling one of the most infamously bad movies out there, Reefer Madness. A dim-bulb overly melodramatic propaganda film (Snarky Editors’ note: like Forrest Gump or Titanic), this 1936 crap-show suggests that “men die for it.”

A middling morality tale about the supposed dangers of weed, the film is now (of course) watched ironically.

Recreational marijuana became legal in our home country (Canada) in mid-October. It’s an interesting time to be living here, to say the least…

So on this episode, we (sorta) delve into the film, watching it in real time (what other kind of time is there?).

So, is this film as ridiculous as it’s cracked up to be? Certainly, but it doesn’t inspire gale-force laughter like some of the insane duds we’ve covered on this program, the likes of Shotgun, One Tough Bastard, Birdemic, etc.

We divulge probably more than we should of on this episode of the Really Awful Movies Podcast. We don’t usually record as we watch, preferring instead to do a bit of (gasp) research…but we thought this would be a perfect opportunity to change the format, if only temporarily.

Some of what we discuss:

(and probably a lot more that we can’t recall).

Join us on the Really Awful Movies Podcast, with smart genre film chat about dumb movies.