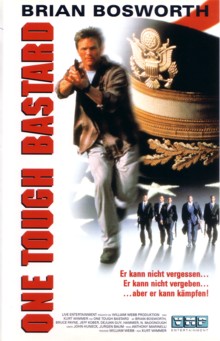 One Tough Bastard, aka, One Man’s Justice is yet another three-word lunkhead action film. And boy, is it a hell of a lot of fun. Starring one of our faves, Brian Bosworth, this one involves a corrupt FBI man (Savak) who is overseeing an illicit weapons trade, procuring arms from corrupt US Army types.

Bosworth (as John North, as good an action name as we’ve heard), is a drill sergeant. And we see how much ass he kicks in, what else? A MONTAGE, BABY! Action movies NEED montages like fish need water.

His wife and child are shopping at a local store, where inexplicably, there’s an arms deal afoot outside. His wife witnesses the shady doings, and the bad guys blow her, and the daughter, to smithereens. They also shoot North, who comes in to help, putting a couple of slugs in his chest.

In true action form, North convalesces…and gradually regains health in order to track down the no-goodniks who killed his family.

However, the true star is Savak, who coos wonderful zingers and handles a pistol with aplomb. He cuts a totally ridiculous figure too, with hair straight from Interview with a Vampire, and even sports a fatuous nose-ring.

One Tough Bastard is hilarious, asinine fun…and even features the rapper formerly known as MC Hammer as a two-bit junk dealer.