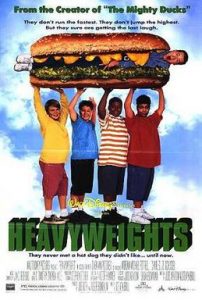 Like many flicks that are not successful theatrically, the film has since garnered a cult following, probably because of the involvement of co-writer Judd Apatow along with Stiller.

As a new owner of a fat camp (which he has purchased from a kindly, if ineffectual elderly duo), Tony Perkis is tasked with whipping a bunch of teen boys into shape.

The boys (who include among their ranks, Fat Albert and Saturday Night Live standout Kenan Thompson) are none too happy about this and decide to stage a coup along with camp counselor and co-conspirator, Pat (played by Frasier’s Tom McGowan).

This is a movie that is being pulled in opposing directions. As a New York Times critic put it, “One…is a no-holds-barred spoof of a Tony Little- or Susan Powter-style fitness merchant […] The other …a conventional family comedy that pokes lighthearted fun at the chubby young campers.”

It’s tonally very odd, but it’s also an interesting look at the comedy star Ben Stiller would soon become. Perkis’ is a fantastically over-the-the-top workshopping of a character. When Heavyweights focuses on him, the film comes to life, otherwise, it sags.

Still, there is surprisingly enough to recommend it even if it falls into the trappings of other summer camp-type movies, Meatballs, etc.

Join us on this unique episode of the Really Awful Movies Podcast!