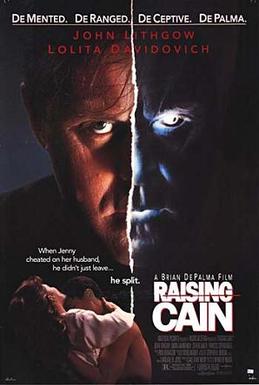 This John Lithgow-starring, Brian De Palma-directed thriller is set around Valentine’s day. On this episode of the Really Awful Movies Podcast, a take on this “demented, deranged, deceptive” De Palma flick, Raising Cain.

Lithgow portrays multiple characters/multiple personalities. He is a child psychologist, Dr. Carter Nix, who is kidnapping kids to use for nefarious purposes (not explained, adding to the air of mystery here).

Against this backdrop, a hell of a lot of family infidelity drama, worthy of a Woody Allen film.

Nix’s wife is an oncologist, Jenny (Lolita Davidovich). Jenny is two-timing Nix, having an affair with (of all people) the widower of a cancer patient she’s treating! It’s an insane premise, and if you are a fan of the equally cheesy Netflix series, You, you won’t be put off by the Lifetime Movie fromage on display at times here.

Raising Cain winds an interesting narrative, as Nix is painted into a corner and has to plot schemes to extricate himself, while the police try to get a handle on what’s going on with the missing kids, as well as missing moms.

Lithgow really embraces the different roles, and shows off considerable acting chops, despite falling into the odd embarrassing / laughable scene.

On this episode of the Really Awful Movies Podcast, we watched different versions of the film (there are two, both of which were released on Blu-ray. One was a fan re-cut, and the other was the more incoherent theatrical release).

Do yourself a favor and watch the re-cut. It’s far far superior.

And don’t forgot to subscribe to the podcast, uploaded for your listening pleasure every Friday.