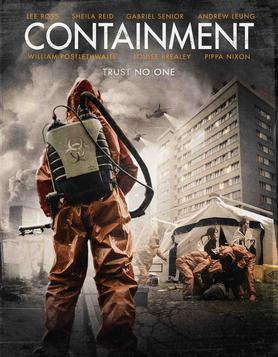 On this week’s episode of the Really Awful Movies Podcast, the underrated, quiet contagion/outbreak film, Containment.

Though lost in what was a banner year for horror (The Witch, Bone Tomahawk, Tag, We Are Still Here) there’s enough to commend Containment to give it a watch five years later.

The film is set in a dismal, concrete high rise housing complex in the Southern UK city of Southampton. Mark, wakes up to find he has been trapped in his apartment, and cannot get out. There is no electricity or water, and piped in through the intercom, a voice from the authorities to “please remain calm, the situation is under control,” this as figures in Hazmat suits roam around the grounds.

And they have set up those MASH-type tents to deal with victims of an mysterious outbreak. Soon, the complex residents have to bandy together in order to survive, and find that kidnapping a member of the government forces doesn’t lead to the desired effect of finding out what the hell is going on.

Director Neil Mcenery-West keeps everything…well…contained, and Containment is largely dialogue and character-driven, and he makes use of the setting quite well.

How does it compare with others of its ilk? It’s hard to say, as the likes of Contagion and George A. Romero’s The Crazies are bigger, more sprawling products, while Mcenery-West keeps things focused on the small moments. In that respect, Containment is closer to the likes of Pontypool than Outbreak.

As we emerge from the pandemic, pathogen movies seem to be all the rage on Amazon Prime (hell, The Rage itself is a fun virus movie too).

Tune into the Really Awful Movies Podcast, with new episodes uploaded every Friday. And be sure to support the show by picking up a copy of our acclaimed book (foreword, Troma’s Lloyd Kaufman), Death by Umbrella! The 100 Weirdest Horror Movie Weapons.