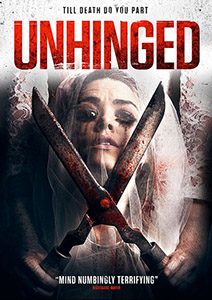 A remake of the 1982 video nasty ‘Unhinged,‘ which we podcasted in an earlier episode of the Really Awful Movies Podcast. In this one, four best friends, young women, decide to take the back roads travelling to a wedding in the English countryside, much to their peril. Dah da dum!

The foursome is off to enjoy fun and frivolity, but finds anything but at a local gas station, where a farm hand is giving them the stink eye and behaving in a way that’s all sorts of creepy. When he meets up with them on a deserted “short cut,” (don’t you just hate those?) later, all things go haywire and the girls put up quite the fight.

This is NOT the new Russell Crowe thriller, people.

This is a rebooting/reworking of a regional Pacific Northwest horror film that most people have no clue about. But c’mon, a bride, and shears a la The Burning? What’s not to like! This one is a doozy, dumb, but undeniably well acted for what it is, with a dynamite score to boot. So is Unhinged a revenge thriller a la The Last House on the Left? Is this a barely sober Oliver Reed wandering around a big sprawling creepy mansion in Burnt Offerings? Not quite, to both.

Stay tuned for more fun genre films and subscribe to the podcast!