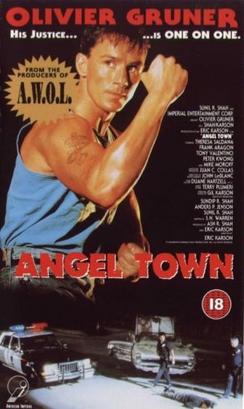 Ah, the City of Angels…La-La Land…Whatever you wanna call it, Los Angeles conjures up a lot of images in people’s minds, whether it’s Charles Bukowski, Hollywood movie stars, hair metal, smog, plastic surgery, the nascent gangsta rap scene of the 90s, urban sprawl/decay…and of course…Latino stereotypes! Angel Town is all about the latter two, and stars Olivier Gruner, real-life French kickboxer extraordinaire as Jacques, a would-be engineering grad student who finds himself experiencing the ultimate culture shock when he arrives to hit the books (and finds out he’s hitting more than that!)

Lacking local campus student accommodation, Jacques has to go further afield, and on two feet to boot in a city not exactly known for its highly developed wonderful public transit. He eventually rents a room in the middle of the barrio/hood, and soon finds himself battling Chicano gangsters threatening his landlord and her family with uzis, firecrackers, knives, fists, you name it.

Luckily, Jacques is not your ordinary number crunching booksmart grad school nerd. He can spin kick with the best of them. Soon, he’s mopping the floor with a bunch of t-shirt wearing “ese” and “homes”-dropping ethnic stereotypes. And this Frenchman is not to be trifled with. The French haven’t kicked this much arse since Napoleon Bonaparte.

Today on the podcast, a look at Angel Town, it’s debits and the film’s considerable charms. At least to us.

Given that this is an action film, there’s a crappy dojo, a tearjerker subplot, but of course at its heart, people getting punched and kicked in the face. What more could you ask for?