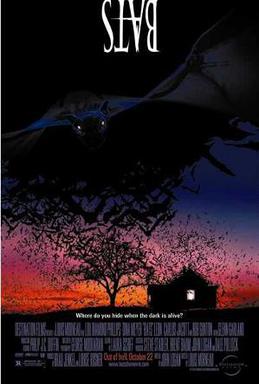 The title says it all: Bats.

In this animal attack flick from the late 1990s, La Bamba Lou Diamond Phillips stars as a small town Arizona sheriff called in to investigate a strange homicide. The coroner is befuddled during the post-mortem.

A chiropterologist is on the case too, as the deaths are linked to the flying furry mammals.

Soon, we find out there’s some sinister scientist up to no good that’s caused this mess to happen. Surprised? No? After all, this is a pretty popular cliché of the genre.

Still, there are some decent enough performances in this. And it’s smarter than it appears, even if it’s not the greatest in terms of execution.