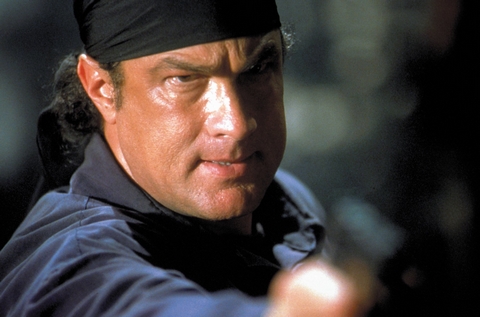 In Submerged, Chris Kody (Steven Seagal, in full Cajun accent mode at the outset, then promptly abandoned midway through) is a mercenary released from prison but with strict conditions: he must take out a South American bad guy who’s taken over a nuclear sub (a sub with Italian language controls that is referred to as Spanish for reasons unexplained).

And in this podcast, we get double your pleasure (and doubled in size) Seagal as we also look at Half Past Dead.

When a sinister European international gangster stereotype says “I am a soldier trained in the art of killing” we know we’re stamping our passports for a visit to Craplandia.

And who better to act as a guide than the aikido legend himself, Steven Seagal?

Half Past Dead is a jail break film based on a phenomenon which is frequent enough that Wikipedia has a page devoted to it: helicopter prison escapes. But lest you think baddies can get away with such shenanigans, this super jail has an undercover agent who twists limbs. Guess who? Also, we get Ja Rule as an Ebonics language instructor / sidekick.