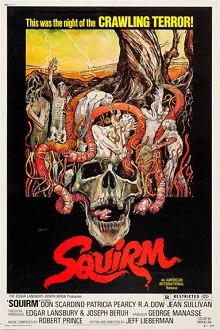 Two times the worms! Twice the ooze. Last time we spoke with Scott, we had double the Shatner, two times as much Captain Kirk as anyone could justifiably handle.

One of our favorite podcast guests is Scott Drebit of the Daily Dead. He’s the brains behind Drive-In Dust Offs,a column that look back at some of his favorites from the mid 70s to early 80s such as Race with the Devil and Willard. He loves animal attack flicks as much as we do, so he was the perfect guest to talk slithery slimy flicks.

On this special episode of the Really Awful Movies Podcast, the three of us break down two very slimy films: Slither and Squirm. The former is a 2006 comedy horror hit starring Nathan Fillion (Castle) and Elizabeth Banks (40-Year Old Virgin). The latter is a fun, under- the-radar 1976 nature run amok film directed by Jeff Leiberman and starring Don Scardino.

We love ’em both – lots. They’re undeniably fun, goofy, gory and smart. You don’t get much better than that folks. Be sure and follow us at @awful_movies and Scot at @phantasm2