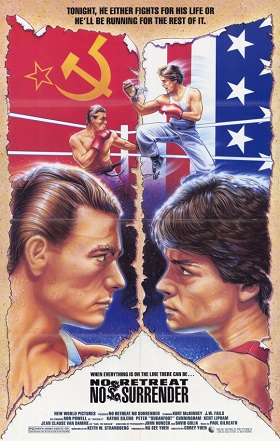 What reigns supreme? LA or Seattle karate? That’s a good question. And that’s one that is explored in the wacky chop-socky Karate Kid knock-off, No Retreat, No Surrender.

Jason Stillwell is a 3-year veteran of the deadly arts, but not nearly competent enough to either a) represent Seattle in a TV combat tournament or more importantly, b) defend himself against bullies. That’s where Bruce Lee comes in, not as inspiration, but from beyond the grave! Someone who bears a very superficial resemblance to Lee, tutors Jason about how to punch, kick, dodge punching bags, and find is inner chi/qi.

That sets up the final showdown, as Jason is in the fight of his life, with none other than The Muscles from Brussels, Jean-Claude Camille François Van Varenberg, better known as Jean-Claude Van Damme!