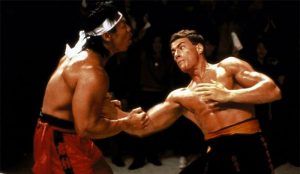 This flick was one of Van Damme’s first starring films and showcased his formidable kicking and flexibility, and dare we say it, charm.

The “Muscles from Brussels, aka, JCVD plays U.S. Army Captain Frank Dux (as in, “put up your dukes” and not “get your ducks in a row). The film was apparently built on the myth, the legend of the real Frank Dux (whose life has mysterious semi-apocryphal origins, a la JCVD contemporary Steven Seagal).

Dux was trained in the US as a young boy by a Japanese immigrant, Tanaka. And Dux wants to honor his mentor and take the place of Tanaka’s deceased son Shingo in the illegal, underground martial arts Kumite no-holds-barred tournament in Hong Kong. However, his employer, the US Army, ain’t happy about it. And they’ve sent two guys to go intercept him in Asia (it’s a dumb subplot, but whatever, it gets us Forrest Whitaker!).

After arriving in Hong Kong, Dux befriends American fighter Ray Jackson (Donald Gibb, who played the hulking Ogre in Revenge of the Nerds). The two hit it off over a mutual love of cheesy video games and get ready to fight in the early UFC-style round robin.

Chong Li (Bolo Yeung) is the powerful pec machine and ruthless Kumite champion—and he’s the betting favorite by the hordes of degenerates who’ve descended on the arena.

Gotta love pit fight action flicks, the rip-roaring excitement, the rippling muscles, the bloody tournament theatrics, UFC-style theatrics, and of course, different styles of fighting (from the ridiculous, to the even more ridiculous)

Since its release Bloodsport has achieved cult status, and for good reason. This flick was followed by a bunch of mediocre sequels, none of which involved our man, JCVD.

Tune into the Really Awful Movies Podcast every week, and our reviews at www.ReallyAwfulMovies.com