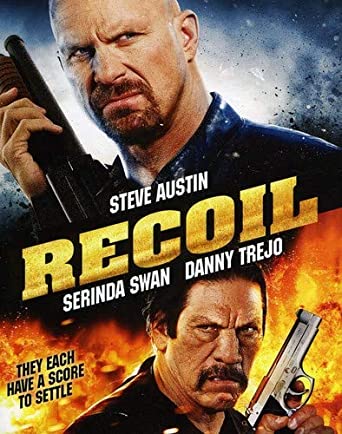 And to up the glowering ante, there’s also Danny Trejo as the chief antagonists.

Somebody quick, flash a smile!

Austin is Ryan, a Texas cop (what else?) whose family has been murdered in ostentatious fashion (basically, a shootout with five gang members bedecked in clown masks firing hundreds of rounds into a suburban home. Talk about overkill!).

He tracks down the culprits, a North American biker gang stupidly called The Circle. They’re holed up in Washington State, because British Columbia is a cheap place to film bad action movies like this.

There’s an almost-love interest, a crooked cop, some people who are the eyes and the ears of the gang (who seemingly run the whole show in the town of Hope, Washington), as well as some goofy explosions, one-liners, and scores to settle. You gotta love those scores. And when they’re settled.

The WWE star Austin gets a chance to show off his brawn and ability to beat down bikers in this entertaining enough production. And there’s someone thrown through a plate glass window. Plus, an explosion where the protagonist walks away like a badass.

Join us, subscribe to the Really Awful Movies podcast, and don’t forget to grab a copy of our book about bizarro action movies, Mine’s Bigger Than Yours! The 100 Wackiest Action Movies.