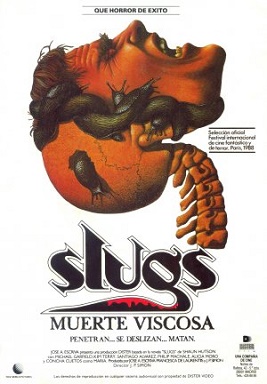 Slugs is a gross-out 1988 Spanish/American co-production.

People are dying due to mysterious causes, and naturally, because this is an eco-horror, there is a lone voice of reason calling for action (who’s being summarily ignored).

It’s surprisingly gory for a nature-run-amok horror. Or maybe not so surprising. After all, this was directed by J. Piquer Simon, the Spaniard responsible for the inane and hilarious jigsaw slasher, Pieces. That movie had a chainsaw, kung fu, and Christopher George (City of the Living Dead), which automatically means it’s must-see material.

Slugs is as well, only because its kills are so glorious and over-the-top. Sure the stuff in between is a let-down, but the slimy set-pieces and gore make it eminently watchable.